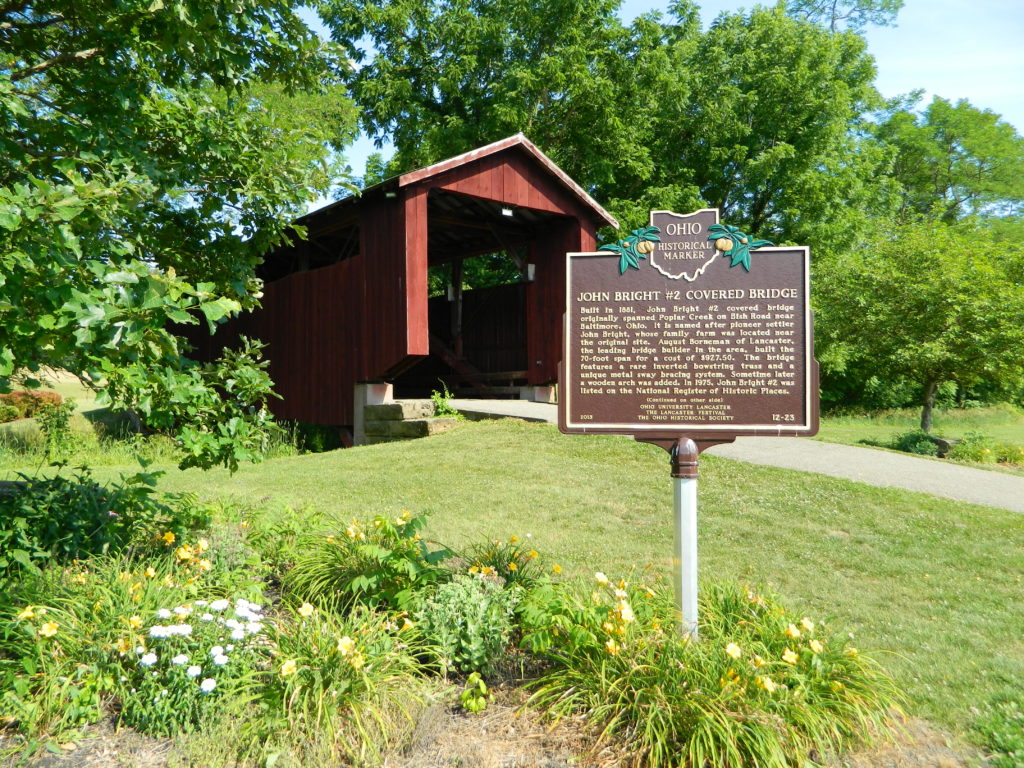 What is it that fuels our fascination with covered bridges?  Are we amazed by the architecture, or impressed by the builders’ ingenuity?  Could it be the beautiful back roads and scenic landscape we experience on our way to the bridges?  Or do we simply long to step back in time to the days when horses ruled the roads?

Whatever you find appealing about covered bridges, you will experience it in spades here in Fairfield County!  Many people are surprised to learn that our region is home to more original covered bridges than any other place in Ohio.  Bridge enthusiasts from all over the world come to explore our 17 historic covered bridges.

One of the most interesting aspects of covered bridges is their construction.  Covered bridges are suspended structures.  Rather than relying on the earth to support them, they hang through the use of a truss system.  A truss system is a series of timbers constructed to support one another while carrying the load that crosses the bridge.  An examination of the many bridges in Fairfield County reveals that a variety of truss systems were used.  Some of the most common were kingpost, multiple kingpost, and queenpost.

Scattered throughout the city of Lancaster, you will find several of these amazing historical structures.  Let’s take a closer look at them.

This beautiful bridge features a multiple kingpost truss system.  It once spanned Clear Creek, in a location close to Zane’s Trace.  It was reconstructed at Alley Park as part of the Fairfield County Bicentennial Celebration in 2000.  Its canopy (window) was added during the reconstruction in order to allow visitors to enjoy the beauty of Lake Loretta.

From the name, we can assume that Mr. Bright had at least one other bridge on his property.  This bridge features a very rare reverse bow string truss system.  Folks from this area know the bridge well, as it serves as the gateway to the Lancaster Festival concerts at Ohio University.

This was the first bridge built by the region’s most prolific bridge builder, Jacob “Blue Jeans” Brandt.  It was saved from destruction and preserved by the Walter family.  The bridge now spans Fetters Run and is a popular spot on the Lancaster Bike Path.

Are you interested in learning more about the covered bridges of Fairfield County?  If so, you can check out the Covered Bridge Trail Guide, available online here or at the Visitor Center (158 W. Wheeling St., Lancaster).  With the guide, you can take a drive through the scenic backroads of Fairfield County and explore some amazing historical structures.

Be sure to take photos of your adventures!  You can tag us @VisitFairfieldCounty and use #VisitFC and #FCBridgeLove.  Visit Fairfield County runs Covered Bridge Photo Contests throughout the year, featuring prizes for the winning entries.  Find an interesting angle or lighting, or have your crew pose while having fun on a bridge.  Post and tag your photos with #FCBridgeLove during contest dates for a chance to win!  Follow Visit Fairfield County on Facebook and Instagram for all the details.