The Bremen Oil Boom commenced in 1907-'08 and the town became a center in the region's petroleum industry. The area was a forest of oil derricks. From this point south, it was said that one could go down Broad Street from derrick to derrick and not touch the ground. A reconstructed derrick, erected to commemorate Bremen's sesquicentennial in 1984, can be seen in Howell Park directly east of this marker. 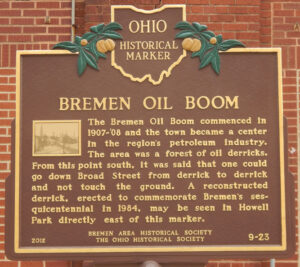 Take a drive or stroll in and around Lancaster, Ohio to see how residents and businesses are showing off…

Harvest Adventures offers something for everyone to love! In the fall, come out and enjoy hayrides every…

This mural is part of a series of murals located on the front of the Zebco Industries headquarters. These…

Buckeye Lake Boat Rental offers all the equipment you need to have fun at the lake! Choose from pontoon…